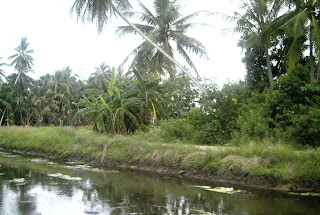 A scenery of the kampong I visited over the weekend.
I visited another PLWHA over the weekend. After several postponements due to various reasons, I finally got the opportunity to visit Yah. My last visit to her house was more than 2 months ago to send over 2 bicycles for her children's schooling needs.
This time my car was full of diapers, milk powder and baby food for her baby. Since Yah moved to her parents home in this particular kampong which is further up north, it is difficult for me to visit her regularly. So I brought along extra supplies as I'm not sure when I can visit her again. Other than the diapers and milk powder, I also brought along some goodies for her other 3 children as well. It's not difficult to please these kids...
Thank God I had been to their house earlier. There were new signboards all over but the signboard showing the way to their little town was no longer there! I had to depend on familiar looking roads or buildings! When I reached the entrance to their kampong, I was hoping there wouldn't be any vehicles coming from the other direction as the road is just a small road - just enough for one car to pass through. In normal circumstances it wouldn't really be a problem... one of the vehicles will just have to move aside and give way. But in this kampong, with a small canal on one side of the road and a paddy field on the other side... imagine if there was a big vehicle coming from the other direction! Would I have to reverse all the way??! Phew... thank goodness the road was clear!
When I got to Yah's house, little Aini (Yah's 11 month old baby) was in her mother's arms. Yah's mother was there too - telling little Aini, "Tengok siapa datang... Mama datanglah..." (referring to me!!) I was loss for words. This grandma was so appreciative of all that I had done (the same things I did for the other PLWHA families actually) she referred to me as the little girl's mama!! (Yah herself is called "mak" by her children.) I was touched! Only thing was... little Aini is not used to having visitors, so all she knew was that this "mama" looked like a stranger. She was probably wondering, "Why the heck is Nek Wan referring to this strange lady as mama?! Nek Wan must be nyanyok already lah..."
The last time I called Yah she was down with a flu. She's still not fully recovered yet but felt a lot better she said. She told me that a welfare officer just visited their house a few days earlier telling her that her application for welfare aid for her children had been approved (for RM400) and that she should start getting the money by the end of May. I do hope there will be no delays.
Little Aini looked just fine (other than confused why I was referred to as mama!). So far she had been tested negative, alhamdulillah! Her next blood test will be done in April next year.
As for the other 3 children... well, Kak Long the eldest seemed a bit quiet. She was closest to her late father who died in December last year. I guess she still misses him. She's in std 3 this year.
Kak Ngah is the one more at ease with me. She used to come along to Ipoh when her parents needed to come for their hospital appointments, so my face (and my car) is so familiar to her already. Kak Ngah is in std 1 this year and according to Yah, is doing well in school.
Abang Chik on the other hand is still very playful and always not paying attention in class. He is also in std 1 this year... no, not Kak Ngah's twin, but they were born in the same year. Kak Ngah in March and Abang Chik in December... just 9 months apart... ooh la la...
This family seemed to be coping well. They are used to living a hard life, so to them it's not much of a problem if they only get to eat rice with anchovies. However, the children need all the nutrition they can get so I will still have to try to visit this family as often as I can.

And oh... guess what kampong product I got to bring home with me? 2 freshly made penyapu lidi... courtesy of little Aini's Nek Wan. Original "nyok" quality... :)

*"Nyok" is the northern pronunciation for "nyiur" (another word for kelapa) meaning coconut.

Nice to know that when things are going well for someone/family. Thank God! And you ... you got to bring home freshly made lidi brooms! I have not seen one in years. Lidi brooms always remind me of my grandfather in Melaka. I'm working on a small story now about him and his almighty lidi broom. :)

Almighty lidi broom, JT? Hmmm... must have some story behind it. Can't wait to read your story. ;)

Elviza, my mother would probably still be doing that... if only we still have a coconut tree. Now that there are more and more houses in my kampong, we cut down the coconut trees before they grow too tall. As my mother said, takut nanti timpa rumah orang...

Aiye... so did the apam turn out to be apambing(apam bau kambing)?

Anyway, I can imagine how appreciative Yah and her family are of you...Although I'm sure you agree all the appreciation is very embarassing, most of the times...

I wish there was a workshop that teaches you how to respond to all this. Remember how awkward it was in Aisya's home? Somehow, repeating 'Ikhlas' over and over sounds like a broken tape recorder...

Kudos to you though for the work you do though!

Nanti bila I balik Ipoh, kita pergi minum la...Got updates on Aisya for you (we might have hit a snag)...

Btw, whereabouts in KL will you be on the 20/5? Cos there's a man who wants to pass 2 tins of PediaSure for Aisya...Since you got kereta, easier to take back...Otehrwise, I'll have to lug on busssss...=)

the family certainly appreciates your work very much.
and what a unique gift you got to tkae home. :)

Daph, if you go picnic in this kampong, I think the kampong people will be staring at you in amusement! :) But you can go fishing... got lots of ikan sepat... or you can panjat pokok kelapa... ha! ha!

Nyonya Penang, yes, unique gift eh? And it seemed to have triggered some penyapu lidi memories... :)

tis must be somewhere in Kerian r Larut Matang district.......

Are you from this district, Quba? :)

I'm from Alor Pongsu.My mom told me one of my neighbour's son passed away at the bus stop last year due to HIV.Sad case since most of the siblings are quite well to do.Things started went wrong when the mom died.Being the youngest one in the family didn't help either...He started abusing drugs and the rest is history....

Aduuuh... meninggal kat bus-stop? Sedihnya! I hope I will never have to come across cases like that, pilu...