I got a call from Mas last Saturday. She wanted to know if she could get any financial assistance from us Buddies if her eldest daughter gets offered to further her studies at any of the higher learning institutions or if the girl continues her schooling in form 6. Her daughter sat for her SPM last year and obtained 4A’s and 5B’s.

Mas is one of our newer clients, having been assigned to us only last year, after moving back to her hometown in Perak last year. Her children received help from our Children Education Fund. Being a non-working single mother, Mas receives monthly aid from the Welfare Department, but that obviously is not enough for her to support her 4 schooling children. She’s still recuperating from a stroke she suffered last year, so getting a job for the moment is out of the question. She now stays with her mother at her mother’s kampong house.

Back to her daughter, the girl plans to either continue with form 6 or to apply for either a Diploma in Accountancy or Islamic Banking. Our CEF covers schooling expenses up to form 6, so we shouldn’t have any problem supporting her schooling needs should the girl decide to continue with form 6. While Mas would be happy should her girl get a place at any of the higher learning institutions, her main worry is all the fees and other payments that need to be made during registration, which will come up to hundreds of Ringgit.

Although our CEF does not cover expenses for higher education, usually I do get donations from friends from time to time to be used at my discretion for the poor families I deal with. Registration needs for the children’s higher education is an example of how I’d be using some of the money donated though me.

After Mas called me, I suddenly remembered that Fuzi’s eldest daughter too sat for her SPM last year. So I immediately called her and was told that Wina, the daughter, scored 7A 2B. Fuzi passed the phone over to Wina so I could speak to the girl myself, since the girl wanted to seek my advise on what courses she should be applying for. Apparently someone had been advising her to apply for medic or pharmacy, when she didn’t even sit for Biology, Chemistry or Physics. After listening to her, I hope she will get a place at any of the matriculation colleges. At least she will have more time to really decide on what course she’s really interested in.

Another sponsored child who sat for his SPM last year was Lin’s son. The boy’s interest had never been in the academic line, which was why he chose Kimpalan (Welding) as one of his subjects for SPM, and true enough, that was the only subject that he scored an A. With 3B’s and 2C’s he also barely managed to pass his Maths and failed his English. Definitely not eligible to apply for any of the diploma courses available. Seeing his interest in welding, I had advised him earlier this year to apply for the Sijil Teknologi Kimpalan course, but the boy was rather reluctant because the place where the course is offered is out of town and he’d have to stay in a hostel instead of commuting from home. But today when I spoke to his mother, I was told the boy had changed his mind and will be applying for the course that I recommended to him.

Great! Hopefully all 3 of them will manage to get a place at any of the institutions they are applying for. I just want them to have a better future with better qualifications.

Updates here and there

Our AGM is finally over and done with. With a new vice-chairman, new assistant secretary and 2 other new faces in the committee, the other 7 board members are the same old faces… not that we have many volunteers to choose from in the first place.

The general meeting also approved a certain amount to be used for volunteer development, and we plan to use the approved amount to send a few volunteers to attend an international conference in Bangkok in November this year (related to our line of voluntary work of course).

Not many questions were asked during the meeting, and there was no need to vote for any of the office bearers either. It was a “I nominate so and so… I second… I propose nominations closed… I second” affair throughout the committee elections. Naturally the AGM ended early and we spent more time after that having our dinner and chit-chatting away.

A few more children were highlighted to me as needing sponsorship for their education, so yes, next in my agenda is to arrange for assessment visits to the homes of these children before I start asking around for interested sponsors…

Remember Azman, Sofie’s son? The one who wanted to stop schooling after his PMR so he could start working immediately as he was no longer interested to go to school?

So what kind of jobs did he think he could get when all he had was his PMR qualifications, which by the way, was not that good? Since his interest was in cooking, he was thinking of helping out at food stalls etc. During that time, a friend of mine, who’s in the management of a private culinary school, suggested to me to send him to the culinary school to take up a one year course in kitchen practice.

Personally, I would have preferred it if he had chosen to complete his SPM first. But I knew that while I could have coaxed him to continue schooling up to form five, he’d ponteng sekolah most of the time, like he did when he was in form 3. He was under sponsorship then, why would I want to waste the sponsor’s money when I knew he’d play truant most of time, right? It was much easier for me to coax him to join the culinary school, where his interest lies.

Indeed, he was excited about the idea. Sofie was already very weak by the time he had to register, so I was the one who accompanied him during registration day.

Then when Sofie died, Azman’s attitude turned for the worse. He felt as though he was the best amongst his siblings, and just because I took interest in his well-being, he thought he could depend on me every time. He didn’t want to listen to his aunt who became his new guardian, and he didn’t even bother to go and see his siblings during weekends. Instead he chose to go back to another aunt… the aunt who had once upon a time spread the news about Sofie’s HIV status to the whole kampong.

I finally had to put a stop to his big-spending style. I told him to manage his own finances (by then his Tabung Kemahiran loan had already been banked into his bank account) and to no longer ask for my help. In a way, I was hoping that by doing so, the boy would go back to his aunt Rozi and his siblings if he needed anything.

Well, he didn’t. While he didn’t dare call me to seek for any more help, he didn’t go back to his siblings either. As a matter of fact, when his older brother tried to advise him to apologise to their aunt Rozi (the new guardian), the two brothers almost ended up in a fight.

When I went to visit Rozi and the 3 children last year, they told me that Azman had stopped going to the culinary school. They assumed he did not complete his one year course there because Azman seemed to be at the other aunt’s house in another town most of the time. I guess they didn’t bother to find out further and Azman didn’t want them to bother him too. I was quite disappointed, thinking that all my effort in helping him to get a place at the culinary school, went to waste.

Well, today my friend (the one who’s in the management of the culinary school) called me up, asking me if Azman had got himself a job. Apparently Azman did complete his one year course, entitling him to a level 2 certificate. Thank goodness!

His attitude hasn’t changed though. Still as stubborn and egoistic as before and still not wanting to apologise to his aunt Rozi for being so rude. Neither had he bothered to contact his siblings.

I am however still relieved that he completed his one year course. Continuing to level 3 wasn’t part of the earlier deal, although I was hoping he would. With the cert that he has now he can apply for a decent job, with enough salary for him to start paying his Tabung Kemahiran loan. He is still young, just 17. Hopefully when he is more matured he will realise how much his family means.

My first ever blog posting was published on 4th March 2007… 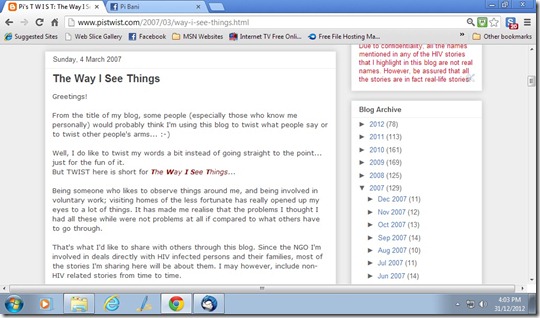 You know what that means? It’s the 6th anniversary of Pi’s Twist. While there may not be as many posts as there used to be before facebook came along, my blog is at least still alive and still updated every month.

Through this blog I found many long lost friends, and made many new friends too. Through this blog, I found donors willing to sponsor our activities, especially pertaining to children education. And I sincerely hope, my postings on this blog did manage to somewhat create some awareness, not just on HIV, but also on the trials and tribulations that the PLHIV & their families have to go through.