As I was looking through my list of clients to assess their needs yesterday, a text message came in on my mobile phone, seeking help.

According to the sender of the message, Dahlia, she had been diagnosed hiv+ in addition to being a breast cancer survivor. Also in the message, she mentioned she had 8 children, 6 of them staying with her.

I immediately called back, trying to get further details, but she didn’t answer my call. I figured she may either be at her workplace, or at a public place where there was no privacy to talk. So I texted her, asking if I could visit her at home, and when would be the best time to visit. I was right, she was at a Klinik Kesihatan, and didn’t answer the call because she didn’t want the conversation to be heard by the people around her.

So this morning I went to visit Dahlia at her home. She and her children stay at a double-storey house, not usually affordable by the lower income group. But don’t get me wrong. The house belongs to her late father, and since her mother went into coma (after a stroke) a few years ago, nobody had been staying there. Her siblings stay elsewhere, and according to Dahlia, she doesn’t really have a good relationship with her siblings.

Dahlia herself had been staying in KL before this, and decided to move back to her parents’ home when she could no longer afford life in KL. Not really knowing what to do, she didn’t even get any referrals from Sg Buloh Hospital for her (and her baby’s) appointment to be transferred to Perak as well. Which was why she was at the Klinik Kesihatan, asking if she could continue her appointments nearer to home. She was told to go back to Sg Buloh Hospital to get a referral letter. But she can’t afford to go back to Sg Buloh, so I arranged for a fellow volunteer who’s a doctor at the general hospital in the town she’s staying in now, to meet her and arrange for a referral letter. After all, Dahlia had not started with HAART yet, so I hope it won’t be much of a problem.

Initially I thought Dahlia got my number from the Buddies brochure, but when I asked her, she said she got my number from someone else. You see, her friends, knowing that Dahlia is a breast cancer survivor, gave her a number of a Datin in another organisation. The Datin did immediately used her contacts in the Welfare Dept, asking them to assess this case. That was immediately done and the welfare department will be giving Dahlia a monthly assistance of RM450 per month, in addition to the immediate relief given to her during the visit.

When the Datin found out that Dahlia was also HIV+, she gave Dahlia my number and told her to contact me. So while I was chatting with Dahlia today, a call came in, and whaddaya know, it was the Datin, who thought she’d call me to inform me that she had given my number to an HIV+ lady needing help. The Datin was surprised when I told her I was at Dahlia’s house at that very moment.

Anyway, back to Dahlia’s story. She has 8 children from 2 marriages. The eldest is 15 years old, and the youngest only 7 months old. 3 children from the first marriage, which ended in a divorce, and 1 of the 3 children is being taken care of by Dahlia’s ex-husband. After the divorce, Dahlia married another guy, but the marriage took place in Thailand, and from what I could understand, it was never registered in Malaysia. Last year, the 2nd husband left Dahlia just like that, together with one of their children, before the youngest one was even born.

So now, without any fixed income, Dahlia needs to take care of 6 children. While she doesn’t have to pay rental for the house, she still needs money for water, electricity, and most importantly, food. To go out and work, Dahlia can only do so during long school holidays when her older children are at home. Otherwise, there’d be nobody at home to take care of the 3 younger children.

The 7 month old baby (and in fact the 2 year old boy too) needs milk and diapers. Dahlia cannot breastfeed, and that means even more money needed. Her 3 schooling children, are surviving with one pair of school uniform each. Workbooks and whatever else that need to be paid to the respective schools, have not been paid. They go to school by bus, but not a single sen has been paid since January this year. The children are beginning to get the unpleasant look from the bus driver.

I didn’t bring much cash with me when I went to visit today, but knowing that the welfare department had given immediate relief when they visited just a few days before, I wasn’t too worried about immediate need for food. However, I did leave her RM200 cash, and told her to pay the money to the bus driver the very next morning, and to promise him that she’d pay the outstanding balance after the coming school holidays. Hopefully, that way, the bus driver will not refuse to fetch the kids after the school holidays.

After coming back from the visit, I immediately updated my FB status, informing my FB friends about the plight of this family. I now already have some donations coming in to be used for the family’s immediate needs. I was also able to get education sponsors for the 3 schooling children. I am planning to bring them shopping next week. Hopefully that will bring the children some cheer.

Where have I been?

Hmmm… more than a month since my last blog posting. Have I stopped doing voluntary work?

Well, no. I am still actively involved with Buddies of Ipoh. But the things that I do are getting more and more routine. Less of those complicated cases I used to get back then. Main thing is probably because my fellow volunteers who attend clinic duties are assigning less clients under me, because I already have a long list of clients.

As for my old clients, either they are doing considerably okay now (okay enough to be independent) or in the case of some of them, they have gone missing from my radar.

And so my routine continues… clinic duty in Ipoh once a fortnight. Clinic duty in Taiping once every 2 months. Home visits when necessary. Monthly board meetings. Making sure the children under our education sponsorship programme get their monthly bus fares/pocket money disbursed on time. Talks/exhibitions when requested.

Once in a while there may something non-routine. Like last Tuesday I was in Penang, invited by USM’s Women’s Development Research Centre (KANITA) as one of the panellists for their International Women’s Day programme, with the theme, “Inspiring Change”. 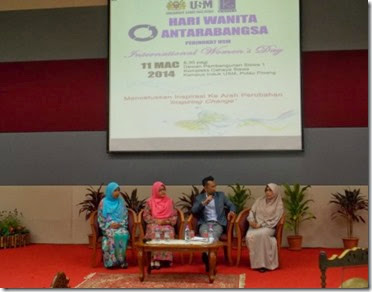 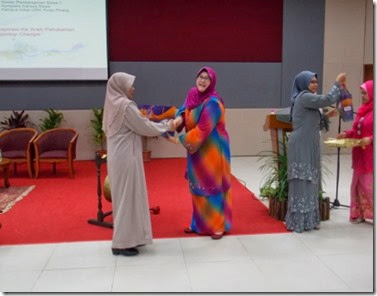 The other 2 panellists were teachers from Sekolah Kebangsaan Lemoi, Cameron Highlands. It was interesting listening to the challenges they had to face being the first (and so far the only) 2 female teachers at the school, away from all the facilities that we have been taking for granted.

It was an eye-opener for me, and being the “adventurous” type, I would love to one day visit the school.

Hopefully my sharing on what I do as a volunteer with Buddies was also an eye-opener to the audience.