When things don’t go as planned

It had been quite a while since I went to visit my clients. That’s one reason I don’t like being the chairperson of Buddies… I seem to have less time for home-visits and need to spend more time on admin matters.

After the PMR exams were over recently, I decided to check on some of the children under sponsorship. I remember the late Sofie’s son, Saiful, was supposed to sit for his PMR this year. The last time I went to visit him and his little sister at their aunt’s house, I was aware that Saiful had sort of lost interest in his studies. According to the aunt, sometimes Saiful would skip school just because he felt too lazy to go. He even mentioned that he’d quit school after PMR.

Seeing that his interest lies in the vocational line, I suggested that he applies for vocational school in form four. He seemed excited about it. I did advise him that whatever it was, he must sit for his PMR first.

Usually the aunt would inform me of any updates on the kids. But since I haven’t been getting any updates from her, I thought things were going well.

When it was announced that applications to vocational schools in form 4 for next year was already open online, I decided to check on Saiful to make sure he doesn’t miss the deadline. I sent a text message to the aunt asking if Saiful was still keen to go to a vocational school in form four. Her reply shocked me…

When I asked why the boy didn’t sit for his PMR, finally the aunt told me that Saiful had run away from home. Apparently he had been playing truant too often, the aunt scolded him. After the scolding, he simply left home and didn’t come back.

I had always given extra attention to children’s education in my voluntary work. So it’s rather frustrating facing cases like Saiful’s. Before this, his older brother Azman didn’t utilise the opportunity given to him at the culinary school. But at least their eldest brother, Azlan is happy doing his certificate course in IKM and had even expressed his intention to continue up to diploma level.

I can’t expect 100% positive results. I can only try to assist the families, especially the children…

I was on clinic duty again today at HRPB, Ipoh. I now no longer complain about getting a parking space at the hospital because I no longer drive to the hospital.

So do I take a bus to the hospital? No.

Do I cycle to the hospital? No.

I just drive over to the velodrome parking, park my car there, and take the free shuttle van service provided by HRPB. Easy!

There were supposed to be 2 new cases to be referred to Buddies today, but when I arrived at the HIV clinic at about 9.30 am, neither of the new cases were there yet. So I went over to wait at the room provided… 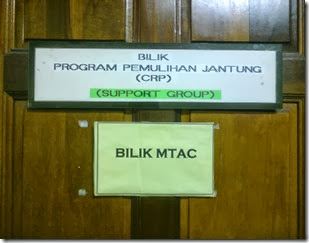 Usually we’d be sharing the room with pharmacists but today I had the whole room to myself, with some hospital staff coming in from time to time to use the photocopy machine, or to use the staff toilet located in this very same room.

After a while, the nurse came in, telling me that one new case was already at the clinic but I’d still have to wait anyway for the doctor to break the news to the patient first. Apparently the guy had not been told about his HIV (he was earlier warded at the hospital for high fever) and so the doctor had better break the news to him first before they refer the guy to me for support service. Usually for the new cases, they would have already known about their HIV before going for their first appointment at the HIV clinic, and so the nurse could refer cases to Buddies without having to wait for the patients to see the doctor first.

When the nurse finally brought the new case to me, it was already about 11 am. A Malay couple was brought in. The one who had just been told about his HIV was the husband, while the wife, since she too accompanied the husband to the hospital, was there when the doctor broke the news. At least we didn’t have to worry about the husband dilly-dallying about telling his wife, who definitely needs to get tested.

While the wife looked calm, the husband said he wasn’t too happy about the fact nobody had told him about his HIV despite having done blood tests previously. Had he known he wouldn’t have married his present wife (this being the 2nd marriage for the wife who has a 17 year old child from her previous marriage). I told him not every blood test done would check one’s HIV status, unless he specifically requested so, or unless there was a reason to do so.

Anyway, while the wife looked rather calm, I knew she was very worried. Her main concern was of course whether or not she too had been infected. After a while, I could see her eyes were a wee bit teary. I tried my best to convince them that having HIV doesn’t mean life ends there. I gave them examples of some people I know who had been living with HIV and taking their antiretroviral for so many years already, yet looked so normal, nobody would be able to tell they were HIV+.

Both husband and wife were to go down to get their blood tested after seeing me. For the husband, to get his CD4 count. For the wife, to test if she’s HIV positive or otherwise. In 2 weeks time they are supposed to come to the hospital again. By then they will know whether or not the wife is infected as well.

I hope she is spared from the virus, but if indeed she has been infected, it is not the end of the world.

I gave her my number and told her to call me anytime should she need to speak to someone about the matter.

A day (half a day actually) at Taiping Hospital

I now no longer worry about finding a parking space when I go for my clinic duties, be they in Ipoh or in Taiping. For Ipoh clinic duties, I’d just park my car at the velodrome parking and use the free shuttle van service from there. As for Taiping, they do have multi-level parking and so far I have had no problem parking there, although most of the time I’d only be able to find vacant parking space at the 4th or 5th floor of the 6 storey parking.

Today I was on duty for the Taiping ID clinic. I got there quite early, and when I took a peek at the doctor’s room, I was told there’d be one new case to be referred, but as at that moment, the patient was not there yet.

So yep, I headed over to our make-shift counselling room (the prayer room actually) and waited there. While I brought along my YES huddle, and the signal was very clear outside the building, once I got into the building, there was no signal at all. The hospital has its own WIFI, but not knowing the password, I wasn’t able to connect to the internet.

With one less available thing to do while waiting, I ended up playing some word games on my android tablet. After almost 1 1/2 hours of waiting, finally the nurse came to tell me that a patient needed to see Buddies.

In came a lady in her fifties, accompanied by a man of about the same age. When I asked which one was the patient, the guy pointed his finger to the lady.

The moment I started asking some history on how she found out about her HIV, they decided to call their son. Thank goodness, it was much easier to communicate with the son then with the couple.

Apparently this lady already knew about her HIV more than 6 years ago, not long after her first husband passed away. I didn’t ask much about the first husband, but her children were the ones who arranged for their mother to get tested.

So this wasn’t a new case after all. But the lady only went for follow up for a short while and after that stopped going altogether. According to the son, the doctor did mention that the lady’s CD4 was quite low but because she felt okay, she didn’t bother to go for follow up appointments. And when she remarried, she already knew about her HIV but did not inform her 2nd husband.

That was until recently when she started feeling weaker and weaker. When I asked if she had any other illnesses, they all said no, “just HIV”. I guess they didn’t really understand. When I asked if she was already on medication, I was told she needs to take 10 different pills each day. 10? Ahh, so she does have other complications other than (or rather, arising from) HIV.

Anyway, the son wanted me to talk to the mother, to give her some encouragement. I told her she needs to be really disciplined with her medication in addition to seeking help from God. I told her she needed to think positively. She looked like the overly sensitive type of person, and true enough, she herself admitted she’d easily cry if anyone scolded or raised their voice at her. I guess she meant her husband, because immediately her husband said, “alah, biasalah tu, sekali-sekala meninggi suara sikit, dari masa sihat dulu pun memang macam tu.”

I told them I couldn’t help them much. All I could do was give them advice, The rest, was up to them, especially the lady. She did say she wanted to get better, and so I made her promise she’d be positive about the whole thing, adhere to her medication and have faith in God.

It will not be easy, but I do hope she has the right attitude in facing the situation. Her son seemed very supportive, so at least that’s a good sign.