Activities for the past few days

Saturday 21st May: I was in Kg Suak Petai, Manong for another freemarket. This being our 3rd freemarket, we thought we were all prepared. What we didn't prepare for, was the rain. It started raining after we had arranged the clothes, on hangers by the side of the tent. We had to quickly take them all down before the clothes got wet.

But overall things still turned out well. We managed to rearrange the items to be closer to the center of the tent, and the turnout by the kampong-folks, despite the rain, was overwhelming. Most of the items on display were taken! 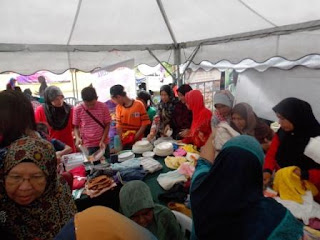 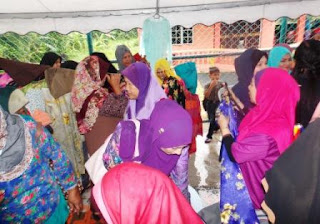 Sunday, 22nd May: I was at the Kandu in Gopeng, witnessing the remarkable results of a remarkable programme called "Program Memperkasa" by Yayasan Kampar to improve English among children in Kampar district. A particular project, Reading by Moms, had been chosen for a special presentation during the coming MELTA International Conference at the end of this month. The event I attended on Sunday was some sort of a competition, where the kids, from as young as 5 years old, all to way to late teens, doing story-telling, poem-recital, and singing.... all in English. And these are kampong kids. What's so special about the project is, the moms, the kampong-folks, are trained to read to their children. I must say I was truly impressed by them, not only because of their command of English, but also by their level of confidence performing in English! Truly awesome. 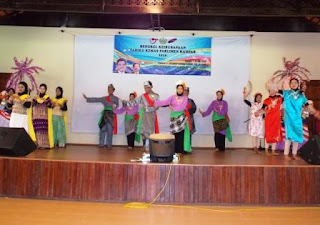 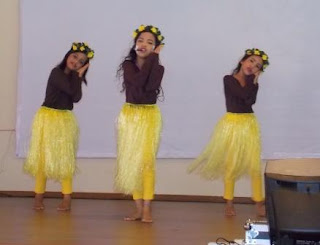 Monday, 23rd May: I decided to visit a client, Aziah, whose son was offered a place for a 3 year diploma course at a college. After seeing the list of total fees for the 3 years, my client was on the verge of telling her son to turn down the offer as she couldn't afford it. This being her first experience, she wasn't well informed of PTPTN and/or other study loans. My explanation via phone earlier wasn't convincing enough I suppose. It is always easier to explain things face to face. I went prepared with all the info, all printed in black and white for her reference.

Aini called while I was driving at the highway. I told her I'd call her back as although I was on handsfree, I didn't want to be listening to people's problems while driving. And when I did call her back, she was complaining about getting billed for things that usually she never had to pay for. You see, since she has to go for dialysis every other day, the ID clinic arranged for her to get her blood test done at the dialysis unit to make things easier for her. According to Aini, she ended up getting billed for the service. I told her to either call the ID clinic and ask, or if she really wants to me to ask, she'd have to wait until my next duty at the hospital.

When I got home, I saw a text message from another client, Syaz, who told me she was feeling stressed. I immediately called her, and the moment she answered my call, she started crying. She told me she couldn't talk because she was at her parent's house, and she didn't want her parents to hear. I told her I'd call her later in the evening when she gets home.

So later in the evening, I called again. And again, she cried. When I asked her what was upsetting her, she kept on saying, "Takde apa." When I did finally get her to open up, it was very difficult to unstand what she was saying because she was crying while talking. All I could manage to figure out was that it had something to do with her husband. I thought it would be easier if I could meet her face to face rather than listening to her on the phone, but for the moment during daytime, she'd be at her parent's home to help take care of her father who was recently involved in a road accident. Since her appointment at HRPB is in early June, I told her I'd try to meet up with her then.

I sure hope she's taking her ARV regularly and on time. All the stress, the worrying and the crying are definitely not good for her pregnancy.
Posted by Pi Bani at 08:16 No comments:

Usually I’d be visiting Dahlia & her children (and not forgetting her 1 year old grandchild) after my clinic duty in Taiping Hospital. However, since last month, the Taiping ID clinic roster had been rescheduled and so now we only send our volunteers there once a month instead of twice a month. With 2 teams of volunteers available, each team will only need to go to Taiping once in 2 months. So I did not visit Dahlia & her kids at the end of April.

I am also now involved in the monthly free market organised by Pertubuhan Wanita Prihatin Perak (PWPP) at different venues around Perak. My task mainly is to collect items, used or new, from contributors, mainly my friends staying in Klang Valley. I usually collect them from my friends whenever I drive south, instead of taking the ETS. I have been collecting a whole load of clothes, shoes, bags, books and some other items for the past 2 weekends.

Since I missed visiting Dahlia’s family last month, and my next clinic duty in Taiping will only be in early June, I figured I might as well visit them without waiting for my Taiping clinic duty. And since I do have a whole collection of various items with me at home, I figured I might as well bring some of these items with me so that Dahlia and her children can choose whatever items they want for themselves. The items are after all, to be given free, so I might as well give some to the poor PLHIV families under me.

So after loading my car with a big bag of shoes, 2 bags of clothes, a plastic bag of headscarves, and a bag of assorted bags (and those aren’t even half of all the items I collected), off I went to visit Dahlia and family. Her 2 younger kids were waving to me from the door the moment they heard me arrive. They wanted to help me carry the bags down from my car, but alas, the bags were just too big and heavy for them.

Dahlia did manage to choose some t-shirts, bags and headscarves for herself and her kids, but most of the shoes were not the right sizes for them. Dahlia only managed to get a pair of shoes for herself and another pair for her 10 year old daughter. The bigger clothes/shoes were too small for her older kids while the smaller clothes/shoes were too big for her younger kids. Hopefully in future I will be able to collect more stuff for age range 3-6 years.

I didn’t get to see Adila and her baby when I was at Dahlia’s house. The baby was sleeping upstairs, while Adila was in her room, under protest. Apparently they had some sort of crisis at home, and Adila was somewhat upset that she couldn’t get so many things that her friends had. She even threatened to go stay with her father (Dahlia’s first husband divorced many years ago). She probably thinks she can lead an easier life with her father. The problem is, her father himself is dependent on his mother (Adila’s grandma) to support him. He doesn’t even have a job and once even borrowed from an Ah Long to supposedly start a business… which never worked out, and the Ah Long had his men chasing Adila’s father at home. Certainly not the kind of environment Dahlia wants her children to live in. Dahlia may be poor, but at least she doesn’t go around borrowing money from other people.

I do hope Adila will come to her senses soon. My main worry is, it was money that lured her to follow her boyfriend before, when she ended up getting raped. She’s such a bright girl, and in certain circumstances a mature girl too. But she is still young and can also get easily influenced by friends living a more luxurious life.

After leaving Dahlia’s house, I called Fuzi to make sure she was home. I used to visit her on monthly basis, delivering groceries and checking on them. But their lives had improved a lot, and so I reduced my visits as I do not want them to be dependent on me.

When I got to her house, her youngest son, Iwan, now 11 (and still not schooling because of citizenship issues) opened the door. Fuzi’s second daughter then came out to invite me in, telling me that her mother was having a bath (Fuzi just came back from a nearby vegetable farm where she works on daily pay basis). Fuzi’s eldest is in a public university, taking up accounting. The second daughter just sat for her STPM last year and when I asked how she fared for her exams, she just smiled and said, “Bolehlah…” While waiting for results of her applications for further studies, she now works temporarily. But today is her off day and so she was home.

And guess what? Fuzi’s second daughter was the one who managed to get the most from the various items I brought along with me, mainly pants/slacks which she can wear for work.

Anyway, I was surprised when the girl who came out to serve me drinks didn’t look familiar at all. Fuzi then introduced the girl as “Kawannya si Hafiz”. Remember Hafiz? Fuzi’s problematic son who always ended up with all sorts of problems at school and didn’t even sit for his SPM last year because he stopped schooling at form 4. Moving from one job to another, finally a more trustworthy friend offered him a job in another state, away from his usual friends. So far he seems to settle down well with this job. Hopefully it will last. Wah… dah ada girlfriend some more…
Posted by Pi Bani at 16:34 No comments: