The talk for teenagers, and another day at the clinic

Over the weekend, there was a sex awareness program for teenagers called PROGRAM PEKERTI, jointly organised by LPPKN Perak and Family Wellness Club at YMCA Ipoh. Just like their previous similar program held in March this year, I was again invited to fill up a slot to share my experiences in dealing with HIV+ people. My slot was on the 2nd day of the 2 day program, so yesterday I went to carry out my part.

Apparently there were supposed to be 28 teenagers from 2 schools. And indeed 28 students turned up on Saturday. However on the 2nd day, all 16 students from one of the schools, made a disappearing act, together with their accompanying teacher. So during my slot yesterday, there were only 12 students attending. But the show must go on, and so we proceeded with the 12 teenagers. Creating awareness in even ONE person is still better than none at all.

This morning I was back at Hospital Raja Permaisuri Bainun for clinic duty. I was told by the nurse that there weren't any cases to be referred to us today, but I still waited for a while for a trainee volunteer to come, as I had promised to introduce him to the staff nurse at the ID Clinic. You see, this trainee volunteer is also a medical student and he is now carrying out a project on PLHIV for his studies, and needed to get the cooperation of the ID clinic.

While I was waiting for the trainee volunteer, a staff nurse from one of the wards called, seeking my help. They had a case of a PLHIV who needed to be sent to a shelter home in Penang, but needed transport. I told the staff nurse I'd go to the ward as soon as I was done at the ID clinic.

So after introducing the trainee volunteer to the staff nurse of the ID clinic, I headed over to the ward to visit the PLHIV and to discuss with the nurses there. For the past few cases of guys needing transport to go to shelter homes, I'd just buy their train tickets and they'd go on their own. This time however, I was told that arrangement was not possible. You see, the PLHIV, an Orang Asli guy, needs full supervision. He even forgets if he has eaten. He may even forget where he's going and so if we were to send him off by bus or train, he may just end up lost.

I asked the nurses if he had any relatives at all. I was thinking, even if they refuse to take care of him at home, they may be willing to just accompany him on a bus or train to Penang. But I was told that his family members do not wish to have anything to do with him. He was married before, and had children from that marriage, but his ex-wife and children aren't even bothered to know how he's doing. He has a mother, but when the nurses called her to inform her that they'd need to send her son to a shelter home, she just told them to go ahead, without even wanting to know where, when or how.

The nurses initially thought I'd be able to make arrangements by tomorrow. They probably thought we have full time staff in Buddies and so it shouldn't be a problem. But we don't have anyone full time, most of the volunteers work 9 - 5 and so we can't simply go as and when we are needed. Anyway, I told the nurses, I'd have to ask around and find out if and when any of my male volunteers are free to send this guy to the shelter home.

Just as I got home, the staff nurse called again. She said she managed to arrange for the guy to be sent by ambulance. Under normal circumstances, the ambulance can only be used to transfer a patient from one hospital to another, not to send a discharged patient to a shelter home. That was what I've been told each time they seek my help to send HIV cases to shelter homes. However, due to his inability to be independent, and with no family members taking him, they decided to be a bit lenient this time. Thank goodness.

Pertubuhan Wanita Prihatin Perak (PWPP) organised its 6th freemarket yesterday. The first one was held in March this year at Chenderong near Batu Gajah. The second one in April at Kg Changkat Tin, Tg Tualang. The third in May at Kg Suak Petai, Manong. The fourth in June at Ashby Flats, Ipoh. The fifth in August at Manjung. This time, for the first time ever, we ventured deep into Orang Asli settlements, in Kg Ulu Geroh, Gopeng.

I've actually been to the place twice before, the first in 2011 for an awareness campaign. During that time, there was a part where we had to drive off-road before getting back onto the tarred road, and so we were advised to go in a 4 wheel drive. That was my first time ever driving a manual 4WD (it was a Pajero) and it turned out I was the only female driver. The second time I went to the very same kampung, it was for a trekking trip to see the rafflesia. The tour operators drove us there.

Having been there twice, I kind of knew what to expect. When a few PWPP committee members went to recce the place and to discuss with the head of the community about our freemarket project, I didn't worry at all about driving there in my faithful old Kenari. We finally fixed the date for 4th September, asked their tok batin for the number of families staying in the community so we could prepare the necessary amount of food items to bring along.

So on the morning of 4th September 2016, we met up near the Gopeng roundabout, before we went in convoy to the Orang Asli settlement. The drive took between 20 to 30 minutes. 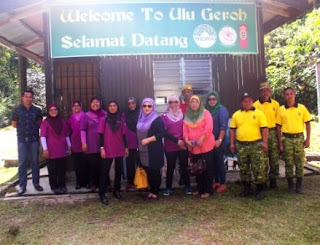 Also joining us were staff of Klinik Kesihatan Gopeng, who provided free medical check-up (plus papsmear). 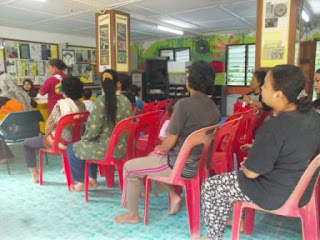 Despite the worries of a few members of the organisation about going deep into Orang Asli settlement with the different culture etc, things went really well. In fact, the Orang Asli people there were obviously more disciplined and well-mannered when it came to taking the free items we brought along with us, compared to the supposedly more "civilized" areas we went to before. Nobody even attempted to try get something while we were setting things up despite us working in open spaces, and even when we told them that they could start choosing the items, they didn't rush to grab the things. In fact, they asked first if they had to pay, and when we said everything was free, they asked if they were only entitled to one item each. And the best part was, we received more "terima kasih" here in the Orang Asli community, compared to the other places we've been to before. So seriously, if you think the Orang Asli people are less civilized, think again. 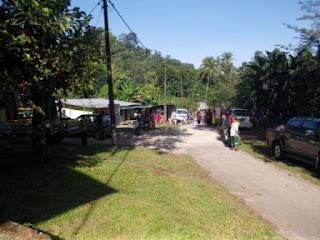 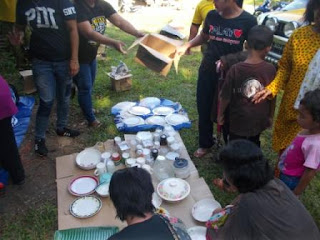 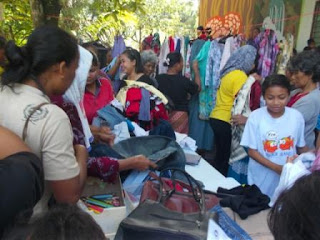 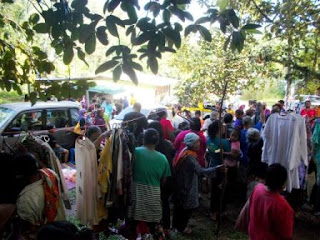 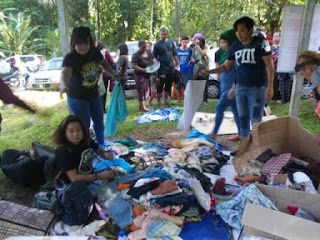 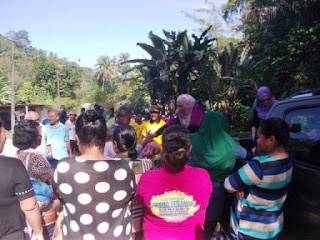 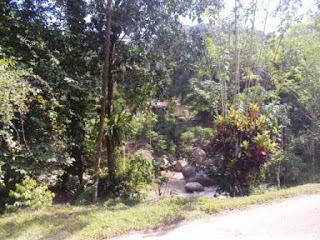 Overall, it was a wonderful experience. For an adventure and nature loving person like me, this is the kind of place I'd go to whenever I need a break from work. (In fact after the freemarket was over, I did go to the nearby Ulu Geruntum waterfalls for a short while, that was the place where I did waterfall abseiling slightly over 4 years ago.) I'm pretty sure the other volunteers too enjoyed the experience of organising a freemarket for the Orang Asli community. Beautiful place. Calming rivers. Lovely people.
Posted by Pi Bani at 11:16 No comments: